After its founding by Lord Ienori, the 6th of the Ogyu-Matsudaira clan, the Seiganji Temple was relocated every time the lord was transferred to a different territory. In Meiwa 1 (1764), the 11th head of the clan Lord Norisuke was transferred from the Yamagata Domain in Dewa Province to the Nishio Domain, which became the 12th and final location of the temple. The number of relocations shows the depth of the bond between this temple and the Ogyu-Matsudaira clan. The temple, built over the course of seven years, was destroyed by fire the year after completion leaving only the main temple gate, but was immediately rebuilt. The current main temple was renovated in Taisho 8 (1919).

Seiganji Temple is a famous temple that along with the treasures of the Ogyu-Matsudaira clan, has a distinctive presence that is fit for Ogyu-Matsudaira ancestral temple.

While the main gate of a temple is usually built on the roof ridge side, this temple’s main gate is built on the gable side. It is said that this is because the temple building’s roof was designed without rain gutters so care was taken that the Lord would not get wet when it rained. 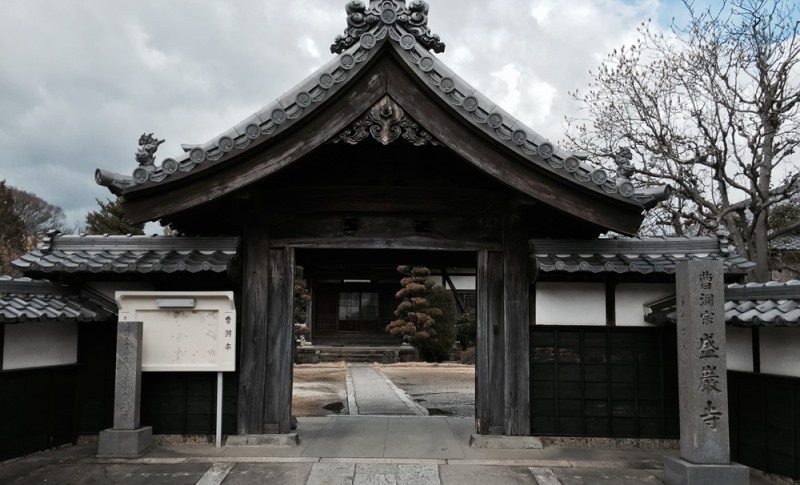 The 14th head of the Matsudaira clan Lord Noriyasu

The 14th head of the Matsudaira clan Lord Noriyasu, lord of Nishio Domain/the 14th head of the Ogyu-Matsudaira clan Lord Noriyasu succeeded reign of the family estate at the age of 46 yearso old and was steadily promoted, and after serving as a “Sojaban” (an official in charge of ceremonies), “Jisha-bugyo” (a magistrate in charge of temples and shrines), keeper of the Osaka Castle, and a Nishinomaru “Roju” (senior counsellor), he was inaugurated as a Senior Councillor on the shogun’s council at the age of 51 years old.

Amidst internal and external troubles such as the financial crisis of the shogunate and the escalating calls to open the country, Lord Noriyasu had many achievements, such as successfully overseeing the construction of the Honmaru (keep and shogun’s residence) of Edo Castle as the Grand Magistrate and establishing the Kamikosugi “Jin’ya” (administrative headquarters) at the new Nishio Domain detached territory of Totomi-Suruga (Shizuoka) of 17,000 koku (an old unit of measurement concerned with the volume of rice produced by an area). These were the most brilliant years of Lord Noriyasu’s life, however he had to temporarily withdraw from his duties as Senior Councillor due to illness. In Ansei 5 (1858), when Lord Ii Naosuke was appointed as Chief Minister and plotted to take control of the forces opposing the shogunate (the Ansei Purge), he again appointed Lord Noriyasu as Senior Councillor as his ace in the hole.

Unfortunately, Lord Noriyasu was held responsible for the aftermath of the series of incidents. He resigned as Senior Councillor and yielded the family estate to his son, Lord Noritsune. In Bunkyu 2 (1862), Lord Noriyasu (who had returned to Nishio Domain) lived in the Nishio Castle Sannomaru East Villa and took an interest in the arts of calligraphy, poetry, and tea ceremony; leaving many works of art for future generations. Lord Noriyasu, who had been at the center of the shogunate, was also a leader in the world of learning and art. 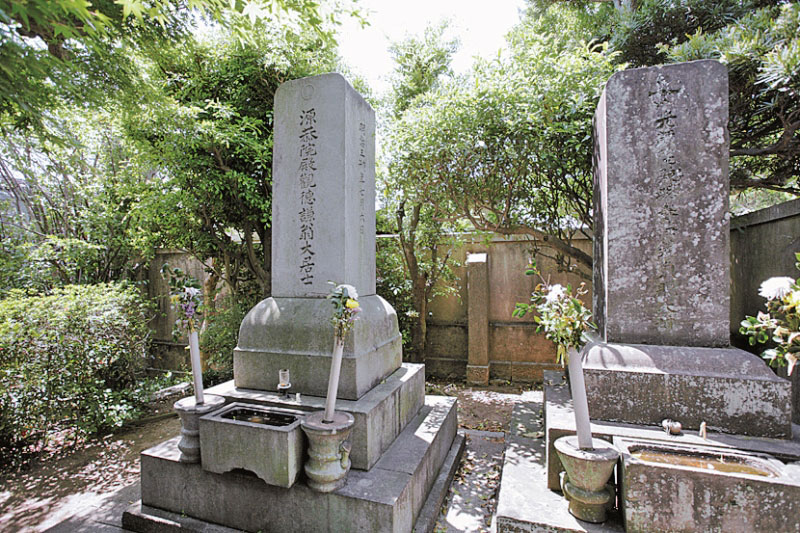 Grave of The 14th head of the Matsudaira clan Lord Noriyasu
ON the right is his wife’s grave.

Grave of The 14th head of the Matsudaira clan Lord Noriyasu
ON the right is his wife’s grave.

In Bunkyu 2 (1862)Isono Sukenojo was sent as a governor to the Tenno Jin’ya in Echizen Province in the Nishio Domain. As a result of his effort to be a benevolent ruler, he was revered by the people of the domain as an excellent governor. Now, he is resting peacefully in the temple’s graveyard. The Isono clan governed Echizen for thirty years over two generations, with eldest son Toyonoshin serving as a local government officer and second son Yunojo serving as local governor

Statue of Namikiri Fudo Myoo: Originally located in Nishio Castle and revered by the successive Nishio lords, it was moved to this temple after the abolition of the feudal domain system. The Namikiri Fudo festival is held on April 29th every year.

It was painted by Kano Tanyu. He was an artist in the early Edo period and he worked as an official painter of the Tokugawa shogunate. He was remembered for his simple and elegant brushworks. It was donated by the 7th head of the Ogyu-Matsudaira clan, Lord Norinaga, in Keicho 3.

Literary and artistic works left by the lords

The successive heads of the Ogyu-Matsudaira clan, the Nishio Domain lords took important positions in the shogunate and contributed to the shogunate government, while also being cultural figures with deep understanding of calligraphy and the literary arts. Many works by the lords, such as books, illustrations, and poems (including Lord Norisada and Noriyasu) remain in this temple.