The History of Iwase Bunko Library

Iwase Bunko Library(IBL) was established by a great merchant in Nishio city, Yasuke Iwase in 1908. He collected more than 80,000 books. At first, IBL was a private library of classic books to spend all his money. After his death, IBL was managed by the foundation, but world war II and Mikawa earthquake led to running in bad situation. Then, Nishio citizens campaigned to preserve IBL and Nishio city bought IBL. In 1994, IBL have started of today’s style and from 2003, IBL became the first classic book museum in Japan.

The library has more than 80,000 volumes including materials designated as important cultural properties and books ranging from antiquity to modern times. The collection contains not only Japanese books but also books from China and Korea.

Wide-ranging collection of books is one of the main feature of Iwase Bunko Library. Generally, collections of personal libraries tend to be lopsided in favor of a specific field reflecting one’ s preference and specialty. The collection of Iwase Bunko Library, however, contains materials in all fields because Iwase Yasuke collected books with an intention to open the library in the first place. There are especially many excellent books on history, literature, religion （Buddhism and Shinto）, natural history. The library has been conserving not only rare and valuable books and also modern general books.

More than 100 of media publish or broadcast Iwase Bunko Library. People all around the world try to contact IBL like BBC network, Nature, and more.

IBL has a large variety of classic books, especially in Edo era. Honzougaku is the most powerful collection in IBL. Hiroshi Aramata, a famous naturalist in Japan, introduced Honsou-zusetsu so many times to media.

IBL has Japan’s important cultural property, Gonara emperor’s Shinkan Hannyashinkyo. Also, Mukujoukoukyou Zishinin Darani which is the oldest printed paper in Japan, and Chushingura’s important material, Kantou Gekou Douchuki. Souseki Natsume’s original letter, and Hyouryuki which contains the oldest UFO’s description in the world.
It is remarkable that people can see its precious collections at first hand. Among researchers, IBL is so popular that many people come to IBL every year.

However, IBL does not exist just for researchers of their studies. IBL has so many trivia books. A game book in Edo era, a manual how to get a girlfriend in Yoshiwara, a cook book of tofu, a manual book of how to make up, and so on.
These books are not worthy as antique books, so that its hard to be left in present day. But these books are also important for our history and culture.

The attraction of IBL is to share the feelings beyond the time. We can laugh and cry by reading these books as people did hundreds years ago.

An example of a collection 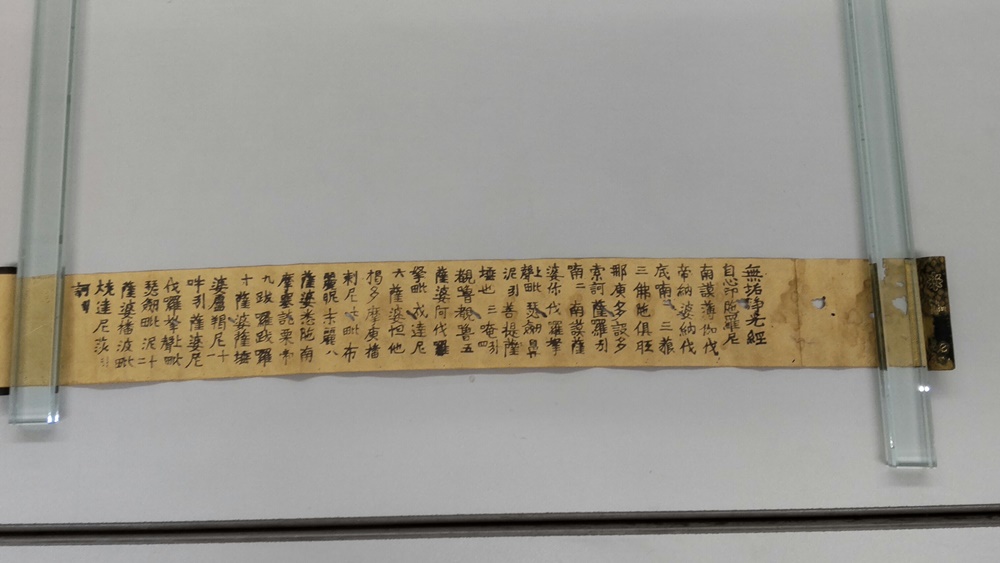 Iwase Bunko Library is a museum of ancient books in Japan. They have over 80,000 ancient items and this pagoda is the oldest one. In the Nara era, the emperor Shotoku ordered one million small pagodas to be made for national peace. Each pagoda contains sutra in it and was delivered to Horyuji and other temples.

According to the book, Syoku-nihongi, that was in the 4th year of Jingokeiun which is the year 770 on the Christian calendar. Most of the pagodas are lost. Now there are only about 40,000 pagodas left in Horyu Temple.
This Darani is the oldest print in the world with the exact date known. This precious document shows the history of printing in Japan and East Asia.

In the Meiji era, the government’s mood toward temples became anti-Buddhist, so the temples had economic trouble. Therefore, Houryu Temple asked for donations in return for the one million small pagodas in 1908. This one at Iwase Bunko Library is the one the library’s founder, Yasuke Iwase, received when he donated 35 yen to Houryu Temple.

Darani is an incantation of Buddhism. Darani is an Indian word of Sanskrit and Kanji was simply chosen for the sound.

In the pagodas, there are various letters written in black ink and covered with white paint called “hakudo”. Though the words are illegible, “April of the third year” can be read. Therefore, it is assumed this pagoda was made in April of the Tenbyojingo era. The last half cannot be read but it may contain the name of the artisan or government official concerning this pagoda.
According to the book, Syoku-nihongi, 157 people were rewarded for the building of the one million small pagodas, so we understand this was a nation-wide project. It’s possible the name that cannot be read is one of those 157. 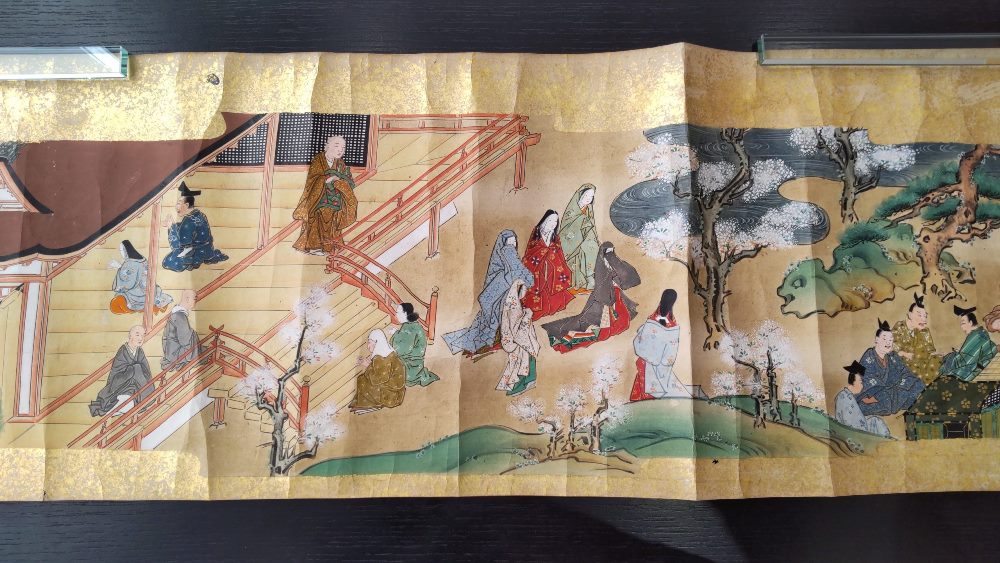 Once upon a time, a priest of high rank who was head of the Bishamondō Temple fell in love at first sight with a beautiful girl while he was viewing cherry blossoms (sakura) and immediately plotted to make her his own.

One night, the priest snuck into her house where her parents were sleeping and using a hollow piece of bamboo whispered into their ears, “I am the god Bishamon! You must send your daughter to the head of my temple!” The title of this tale comes from the priest’s whispering through the bamboo tube. The parents, fervent believers, are fooled by the priest’s false oracle and convince their unwilling daughter to go to the temple.

The priest, smiling inwardly at how his plan is apparently working, realizes it is impossible to have her brazenly walk into the temple through the front gate. So, he sends two young monks to her house with a long box for storing kimono, etc. They place the girl inside and take her to Bishamondō temple as if she were a package.
The two young monks carrying the girl in the box on their shoulders head to Bishamondō temple, but halfway there they get tired and decide to take a break and also start to fall asleep.

Just at this moment, a young nobleman hawk hunting happens upon the box. Thinking to himself, “what is this strange box doing here?” He opens the box only to find a beautiful girl sorrowfully squished inside.

Telling the nobleman how this had led to that and everything that had happened, he pulls her from the box. But if he leaves the box empty, they will know immediately that the girl has escaped. So in her place, the young nobleman puts a calf inside the box.

Finally, the two young monks awake from their nap and, without realizing the girl has been switched with a calf, pick up the box again and return to Bishamondō temple. The priest, anxiously awaiting the arrival of his prize, opens the box only to have a calf jump out, instead of his beloved girl. Thinking that the girl has been changed into a calf, he exhausts himself praying for her to return to her original shape. But there is no way that this calf is going to turn into a girl and simply runs around violently.

On the other hand, the girl who was saved by the young nobleman is taken into his house as a bride, bears him many children, and lives a long life of happiness.