The History and Culture of Rice in Japan 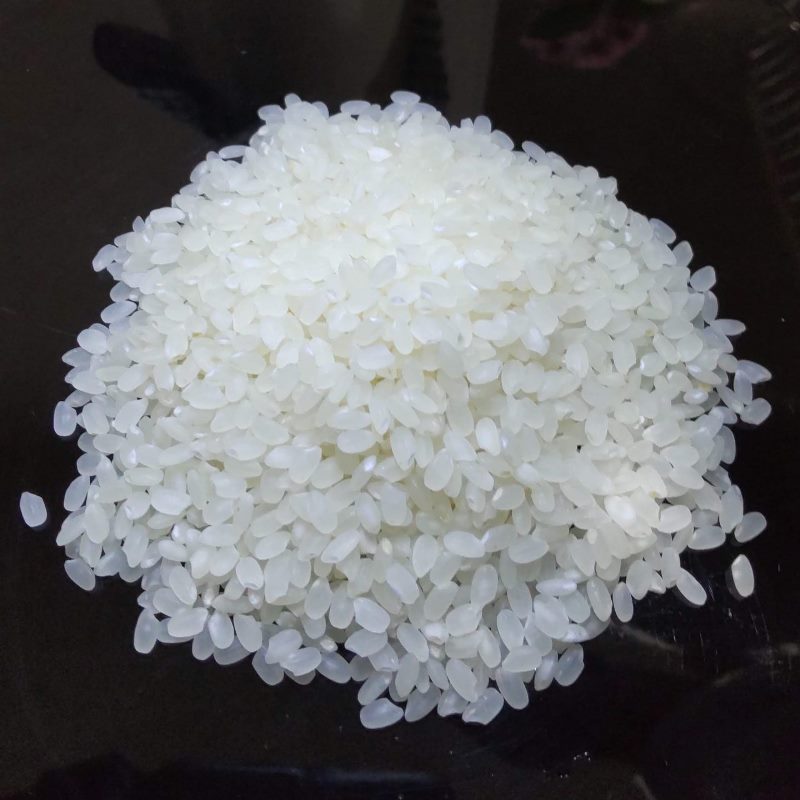 Rice is an integral part of Japanese culture.
It’s not just a staple food: food and drink made using rice play a vital part in Japan’s traditions, celebrations, and spirituality.

It is believed that rice was first brought to Japan from China via the Korean Peninsula somewhere between 300 BC and 100 BC.
Since then, rice agriculture has been a vital part of Japan’s development. Even today, the import of rice is strictly regulated in order to protect Japan’s rice agriculture industry and food security.

Food and drink made from rice play an important symbolic role in the traditions and culture of Japan.
For example, in Japanese Shintoism, rice and saké (Japanese alcohol made from rice) are commonly used as ceremonial offerings to the Shinto gods and ancestors. Saké is even sipped ceremonially as a rite at Shinto weddings.

Rice also plays an important role at celebrations in Japan. Sticky Japanese rice is often cooked with adzuki beans to make a dish called sekihan, which is commonly served at birthdays and other celebrations.

Types of Rice in Japan 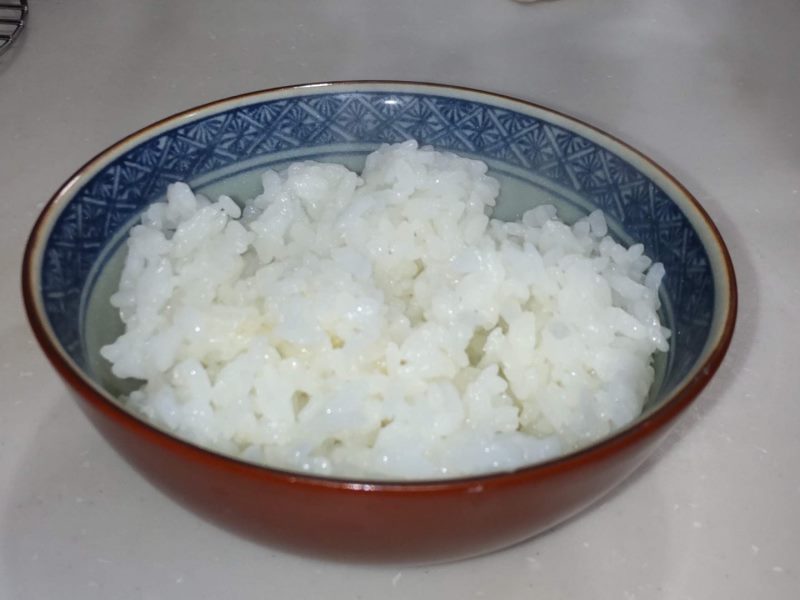 The white rice typically eaten today was not always enjoyed in Japan. Brown rice was once the most common rice of choice. It is still widely available in Japan nowadays, but not as commonly eaten.

The labor-intensive process of removing the bran meant that it was a luxury reserved for society’s elite. As industrialization reduced the cost of processing, the consumption of white rice began to spread throughout the population during the Meiji era (1868 – 1912).

Today, around 75% of people in Japan eat short-grain varieties of white rice, while almost 20% eat this rice mixed with other types of whole grains such as barley or millet.

There are around 300 varieties of Japanese rice grown throughout Japan today.
The most commonly grown variety is Koshihikari, a cultivar first registered in 1956. This type is known for its mild sweet flavor and pleasingly glossy look.

As the staple of a country with such a rich food culture, the Japanese people have found countless ways to cook with rice.
Here are a few of the most common rice dishes.

①Rice in a Traditional Japanese Meal 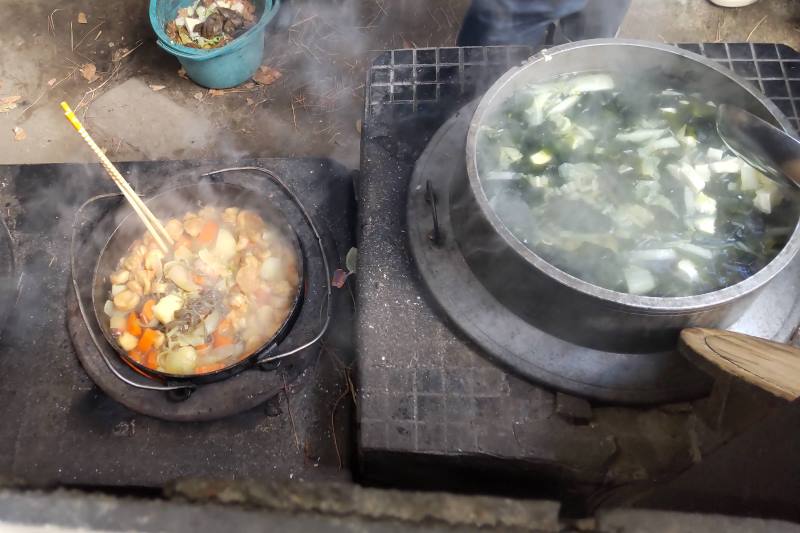 A standard traditional meal in Japan is often referred to as 一汁三菜 “ichi-juu san-sai”, or “one soup, three side dishes”.

This describes a meal that includes a bowl of rice, a soup, and three side dishes; which may consist of a protein like fish or tofu, a salad (vegetables) and so on.

In this type of meal, you’ll see that rice is typically served without additional flavorings in its own bowl. Japanese people will typically eat their rice in this way to enjoy its inherent flavors. 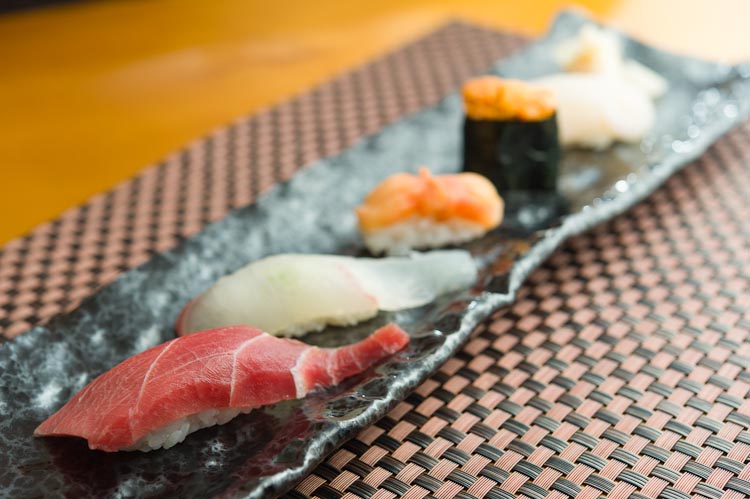 This is perhaps the most famous Japanese rice dish internationally! The rice for sushi is made by seasoning freshly-cooked white rice with a mix of vinegar, sugar, and salt. It is served at room temperature with fresh seafood and other toppings. 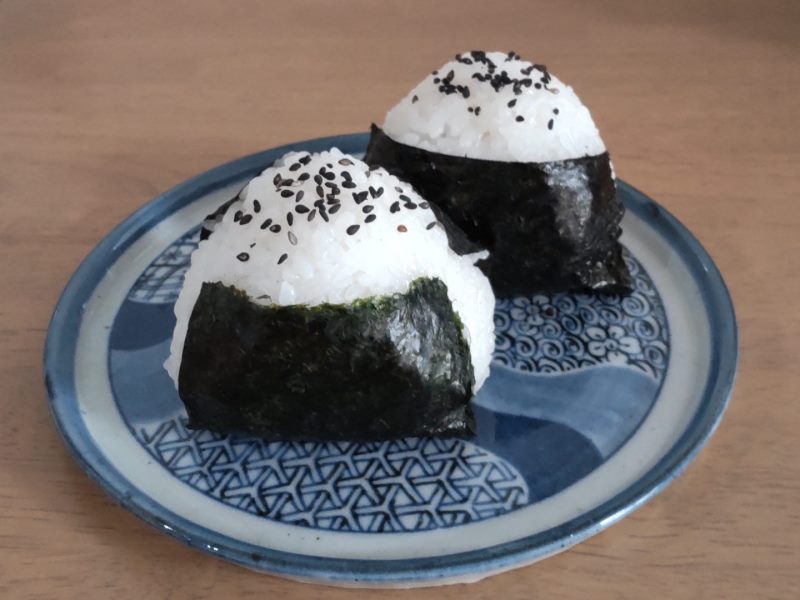 Onigiri is a common home-style food that serves as a quick, affordable, and portable meal. You can make it at home, or you can buy it from places like convenience stores in Japan, where they sell for around ¥100 yen.

Commonly translated as ‘rice balls’ in English, onigiri can take a number of shapes, but the triangle style pictured here is the most common. 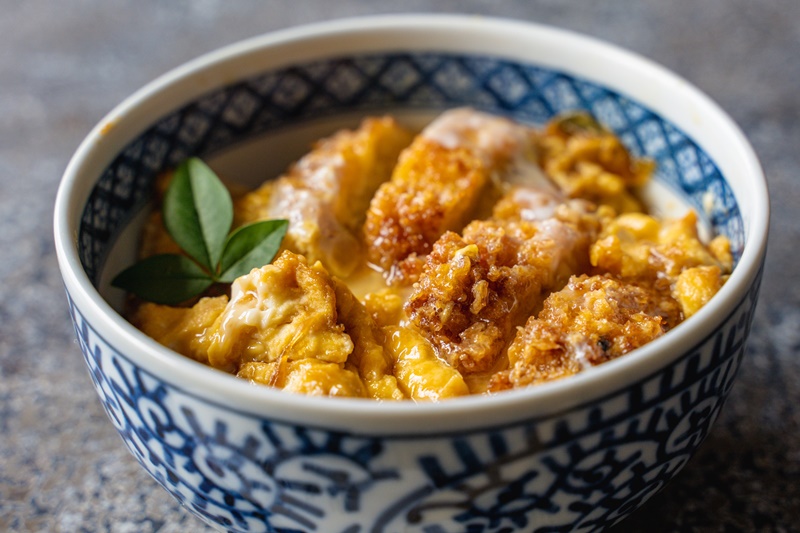 Donburi, or rice bowls, are one of the most popular types of fast food in Japan. Unlike the traditional Japanese meal that consists of a number of individual dishes, donburi are hearty, one-bowl dishes that consist of rice and toppings like beef, chicken, egg, tempura, or seafood.

What is Miso Soup? 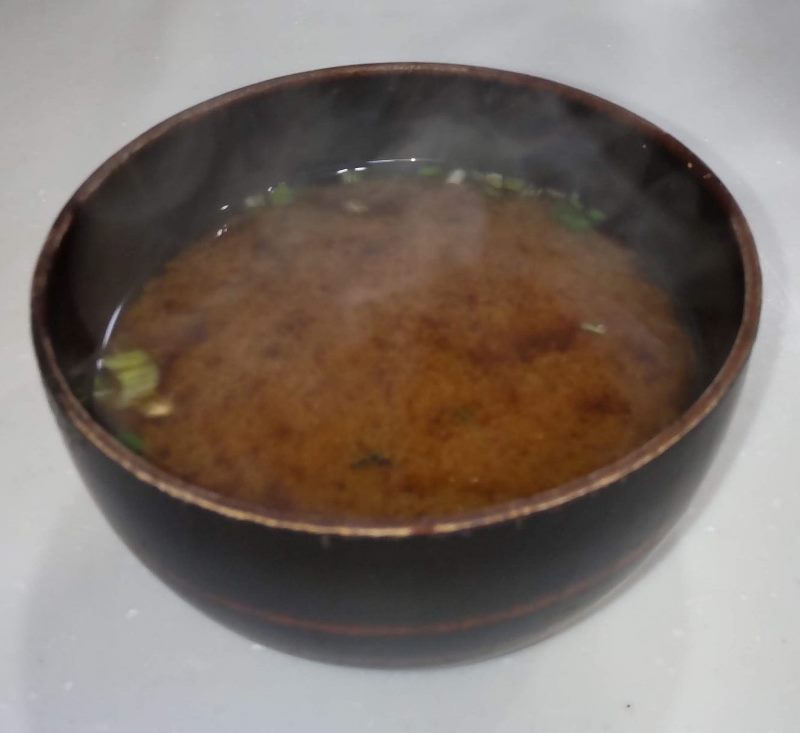 Most Japanese meals are served with a bowl of steamed rice and a traditional Japanese soup called miso soup (味噌汁). Depending on the region, season, and one’s taste, you can find many varieties of miso soup enjoyed in Japan. In addition to the classic tofu and wakame combination, we also use a lot of different ingredients to make the soup. That’s why we never get tired of it.

Miso (味噌) fermented soybean paste, is made from soybeans, grains (steamed rice or barley), salt, and koji (麹, a fermentation starter). There are many different brands and varieties of miso paste on the market.
Each miso paste and brand varies in saltiness and flavor, so adjust the amount of miso according to taste. You can also mix 2-3 types of miso together for more complex flavors. Otherwise, if you have good quality miso, enjoy its own unique characteristics.

A typical Japanese miso soup bowl holds about 200 ml of liquid. As a general rule, we add 1 tablespoon (18 g) of miso per bowl of miso soup (200 ml dashi (stock).
The most important thing you must remember is: NEVER boil miso soup once the miso has been added, otherwise it loses its flavors and aromas.

More than 80% of Japan’s annual production of miso is used in miso soup, and it is said that 75% of all Japanese people consume miso soup at least once a day. 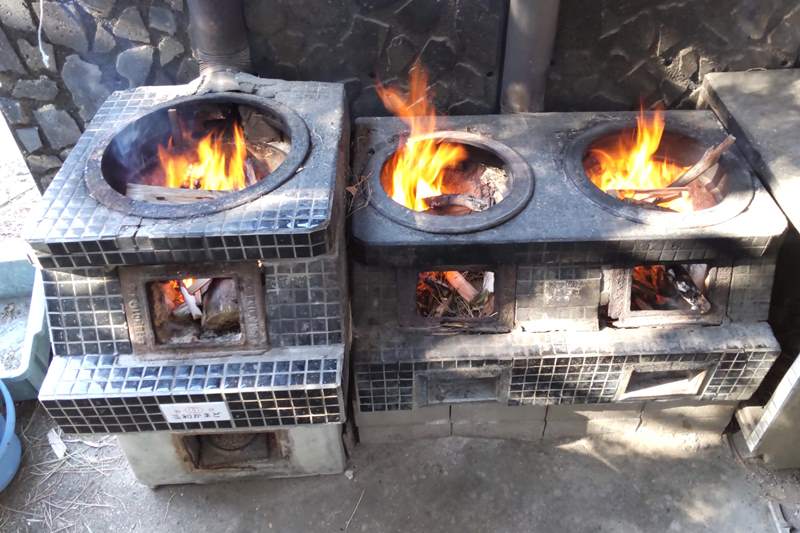 A kamado (竈) is a traditional Japanese wood- or charcoal-fueled cook stove.
It means “a place for the cauldron”.

Since Japanese kamado were introduced from Korea, the word kamado itself is rooted in the Korean word gama (가마), which means a buttumak (hearth). Some kamado have dampers and draft doors for better heat control.

Together with the development of society different types of Japanese-style kamado increased. They were used for a long time until the portable cooking charcoal stove was created.
When cooking rice with a kamado, it was difficult to control the heat of the flame.
In Japanese food culture, there has been a particular revival in this Japanese-style kamado cooking among some high-end restaurants that are meticulous about their dishes.

Until the Meiji era, a kitchen was also called a kamado; there are many sayings in Japanese that use the word ‘kamado’ as it was considered a symbol of the home and the same term could even be used to mean ‘family’ or ‘household’ (similar to the word ‘hearth’ in English).
When a family member started their own branch of the family tree, it was called, ‘kamado wo wakeru,’ which means ‘to divide the stove.’

How to Split Firewood with Tools 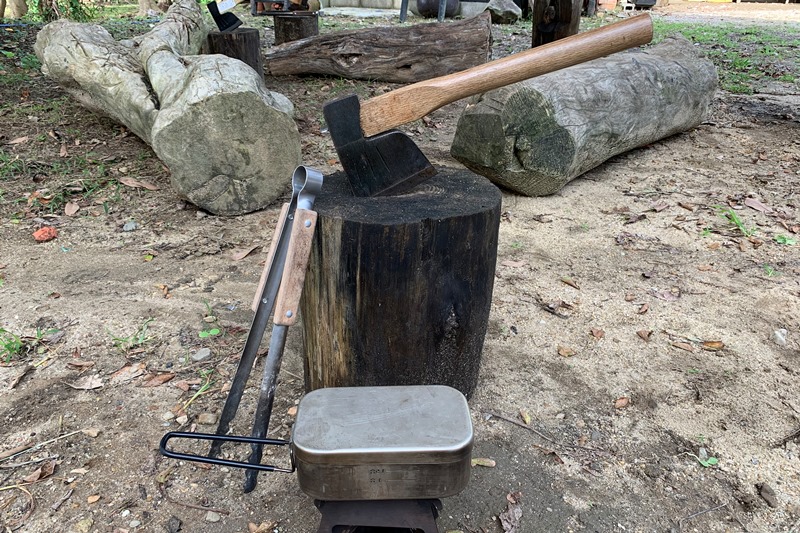 Breaking firewood is a joy for some and a chore for others. Whatever it is to you, it should not be a struggle. With the right techniques and approaches, even the largest logs can be processed.
I will show you how to make firewood by breaking it with an ax.

An ax (ono, yoki) is a thick heavy blade for cutting wood attached to the end of a handle that can be held with one or two hands.
A hatchet (teono, chona) is a small ax with a short handle for use in one hand (usually to chop wood.)

Straight-grained wood is best, avoid knots and curves if you can. The logs that you’re going to split, regardless of diameter, should be between 20 to 30 cm long. This is about the maximum size that can fit inside a kamado (fire stove)

2. Preparing to Split the Wood

Put the piece on its end, on some sort of chopping block if possible; stumps or larger pieces of wood work well. If not, just put it on the ground, propping it as needed to keep it standing. Note that driving the ax into rocky soil can dull the blade.

How to Split Wood Splitting Wood with an Axe 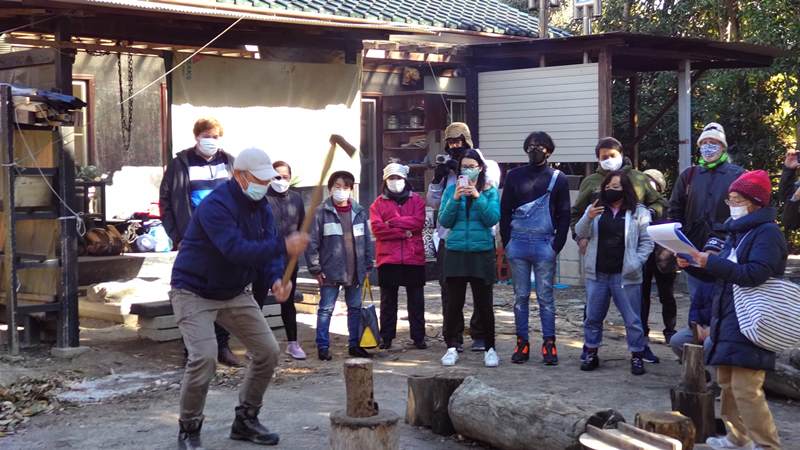 Stand with your feet placed evenly, shoulder-width apart. If you find it more comfortable, you can stand with one foot slightly in front of the other. Don’t exaggerate it though, because it’ll prevent you from using your hips to add power to the swing; which is the secret to effective, low-effort wood splitting.

Raise your splitting axe or maul above your head and let it drop. There is no need to use all your strength or a big swing!

As the axe drops, your dominant hand, – which should start with gripping the handle just beneath the axe head – should slide down to meet your other hand at the base of the axe handle.

As the axe drops, bend your knees and pull your hips back, so that your bottom sticks out; this’ll add extra kinetic energy to the swing. You’re using your hips and legs in this, and this technique is the secret to making wood splitting easy and doable for long sessions.

What do the 3 lines on one side of the ax and the 4 on the other mean? 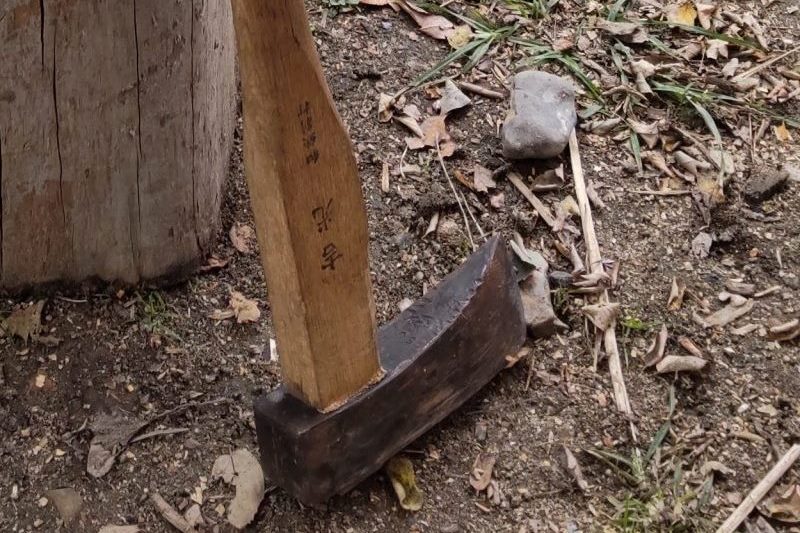 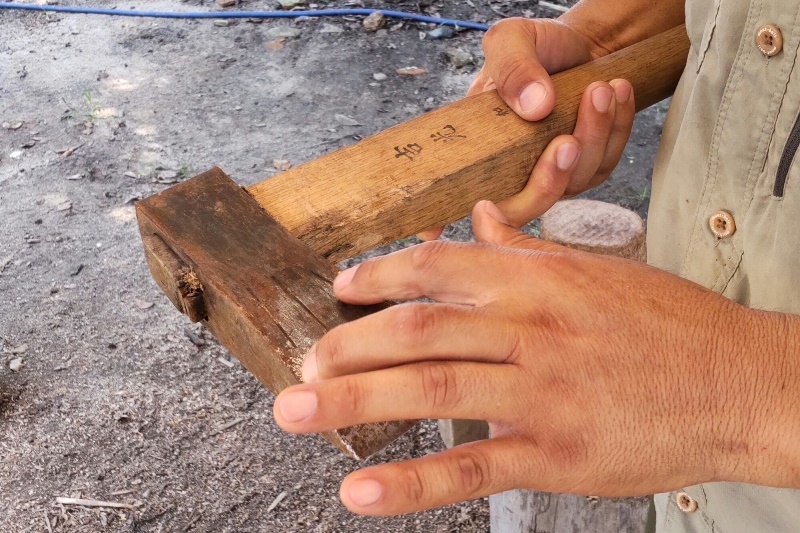 Before a tree is cut down, the ax is leant against it; a prayer is made to show gratitude and to ask permission for the use of tree (including the lives of other creatures) that has been given by the mountain god and to ask for safety while working.

There is also said to be a superstitious play on words that says, ‘3 (mi) wo 4(yo) keru’ meaning, ‘to evade danger.’ So even if a large tree were to fall you would be able to evade it.