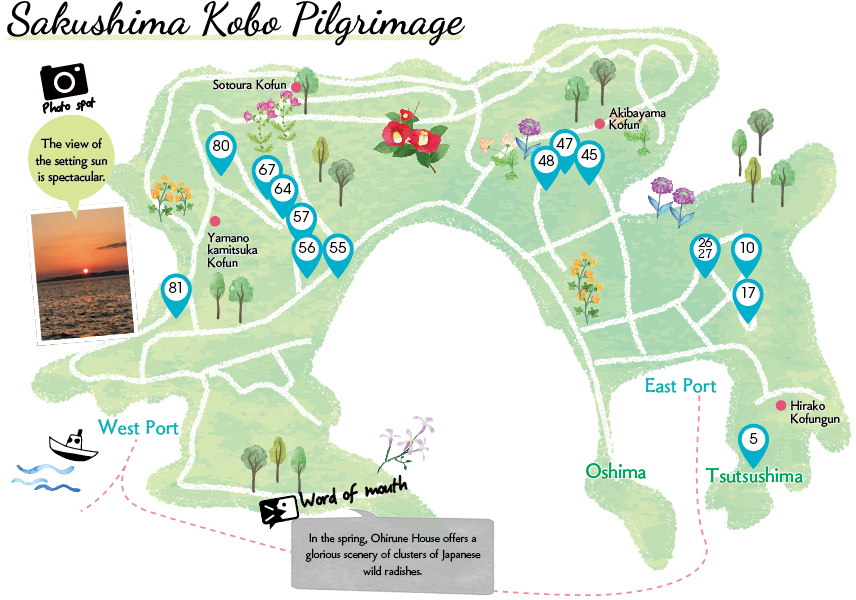 Who is “Kobo Daishi”?

Born in the early Heian Period (774CE), Kobo Daishi (whose Buddhist name was Kukai), was the founder of the Shingon sect that brought Shingon Mikkyo (Shingon Esoteric Buddhism) to Japan.
The sacred sites where he wandered in the mountains of his birthplace, Shikoku, while practicing asceticism were organized and each given a fuda(tag) number during the Edo period.
Even now they continue to be a place of worship for many as part of the Shikoku 88 Temple Pilgrimage.

The History of Sakushima’s Kobo

At the beginning of the Taisho period, reproductions of the Shikoku 88 Temple Pilgrimage sacred sites were built all over the country.
About 95 years ago in Taisho 5 (1916), 88 Kobo Daishi “hokora”, a kind of miniature Shinto shrine, were built on Sakushima. Before WW2, many pilgrims from mainland Japan making the Kobo pilgrimage visited.
It is said that they stayed at the temple lodging at Amidaji Temple and island was busy with visitors.
At the Kobo Festival on the 21st of March on the lunar calendar, there is welcoming custom called “osettai” in which beautiful flowers are displayed at the hokora shrines all over the island, reviving the memory of the liveliness of the past.
The Sakushima Kobo Project was a three-year plan began in 2010 to restore the lost hokora through the power of modern architecture.
The lost Kobo Daishi seated statues were reproduced by two artists (Hidetaka Furukawa and Toru Matusoka), completing the restoration of the 88 Hokora Pilgramage sites in 2012.
Sakushima Kobodo is a new walking path tracing the history and local traditions of Sakushima.
Please be careful of your surroundings and spend your visit in serene calm.

No.5 Asahi ga saisho ni terasu basho: Sankaku (The first place lit up by the sunrise :Triangle)
by Tsutomu Nagaoka 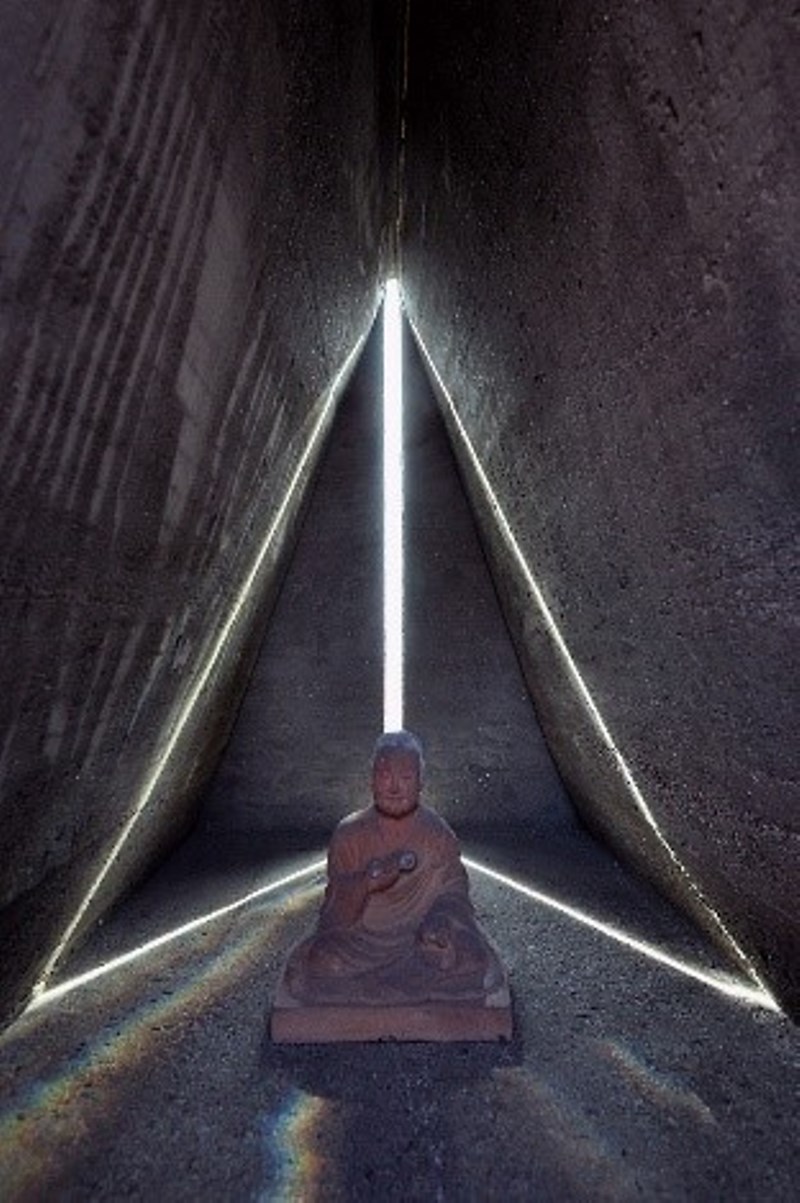 This hokora shrine on top of the sheer, rocky cliff combines a simple geometric shape that is as impressive as the view of the sea spread before you with the strong presence weathered by the ocean breeze.
The outline of the Sankaku’s(triangle) concrete diagonal joints looks as though it is jutting out of the ground.
If you look through it as the morning sun shines through the glass slit in the back, it looks as if a halo is shining around Kobo.

No.10 Namioto ga kikoeru mori no naka de:AO (In Woods with the Sound of Lapping Waves :Blue)
by Masashi Sogabe (Mikangumi) 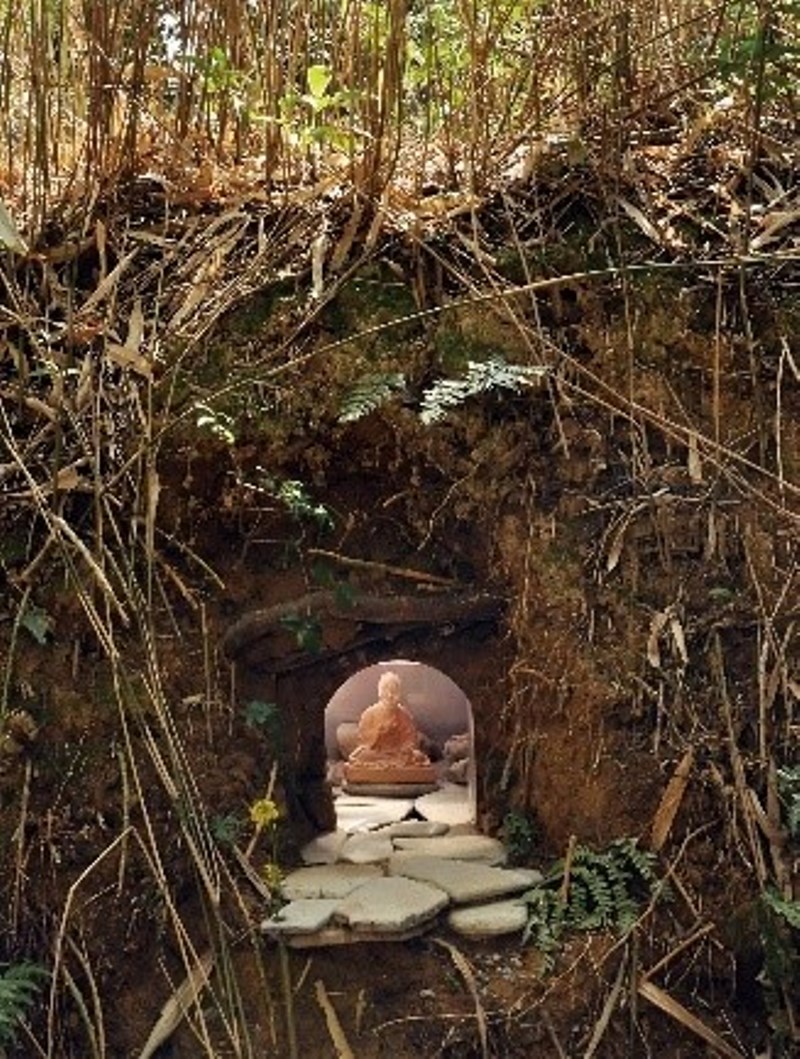 You can feel the faint signs of the sea in the forest in this place down from Tannashi Beach.
Chestnut tiger butterflies that cross the sea in the fall visit the green leopard plant creeping nearby; and in the sea, rich purple dye can be collected from the Akanishi shell(Thomas’ Rapa Whelk).
The name “Ao” (Blue) embodies the colors of the nature of Sakushima, such as the blue of the butterflies and shellfish.
There is a trick to bring light to the inside of the hokora shrine in the low light of the forest, so warm light is brought to the Kobo Daishi statue for a limited time each day.

No.17 Kaze no Otozure (～The Visit of the Wind～)
by Aichi Institute of Technology Nakai Laboratory 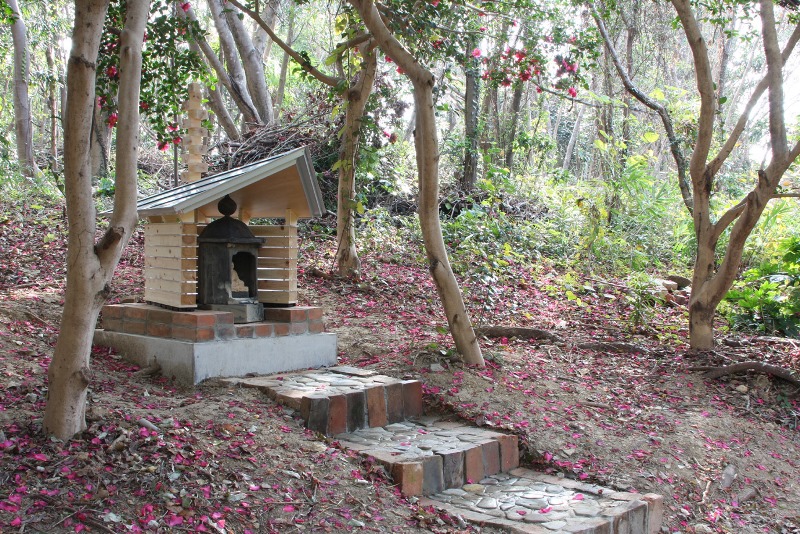 This artwork depicts the multilayered history of Sakushima using wooden and acrylic walls.
Although traditional hokora shrines usually held in moisture this structure lets a refreshing breeze pass through shrine.
The shape of the roof replicates a pilgrim’s hat. The tower at the back is designed to suggest a walking stick. 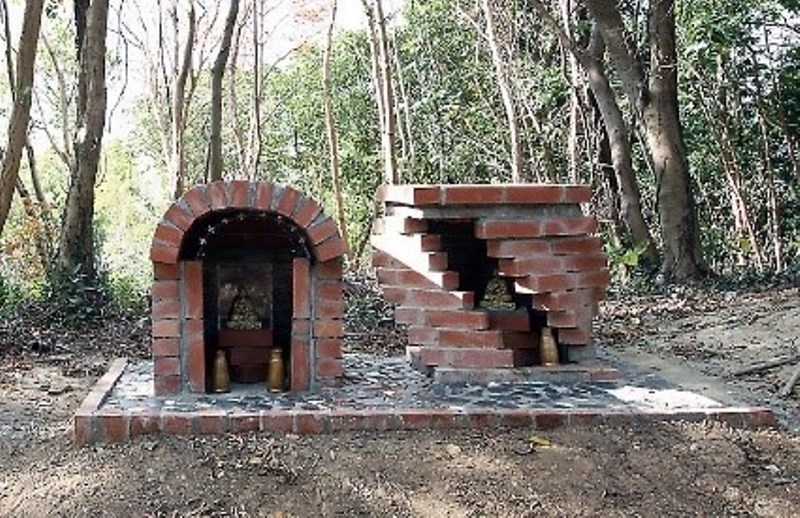 No.45 Houkei (Square)
by Nagoya Institute of Technology Kitagawa Laboratory 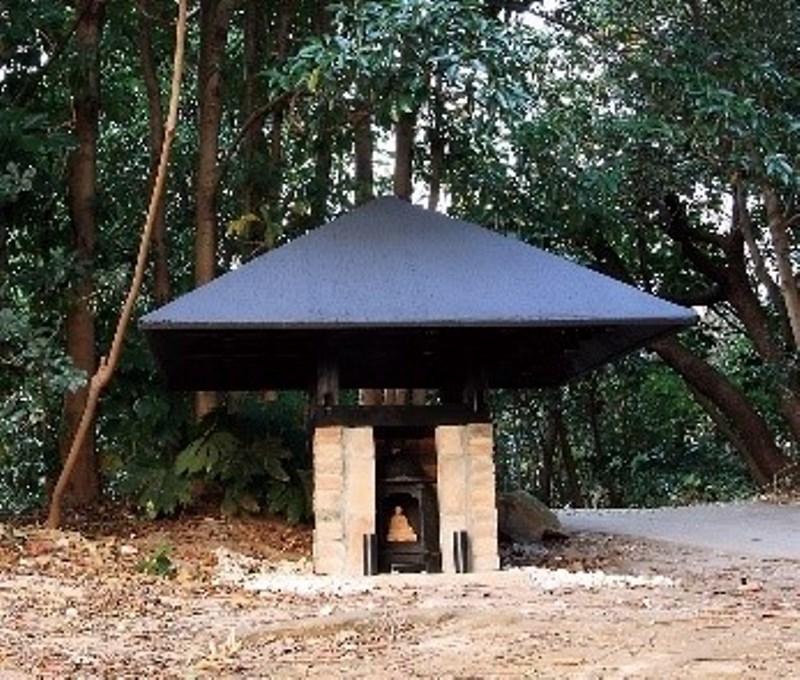 The main body of the hokora shrine was reconstructed using bricks from the dismantled original shrine.
Befitting of Sakushima the roof was made of wood and painted black.
Inside the large roof there is a complex wooden structure.
By crouching and passing under the large roof, you can reduce the distance between yourself and Kobo Daishi. 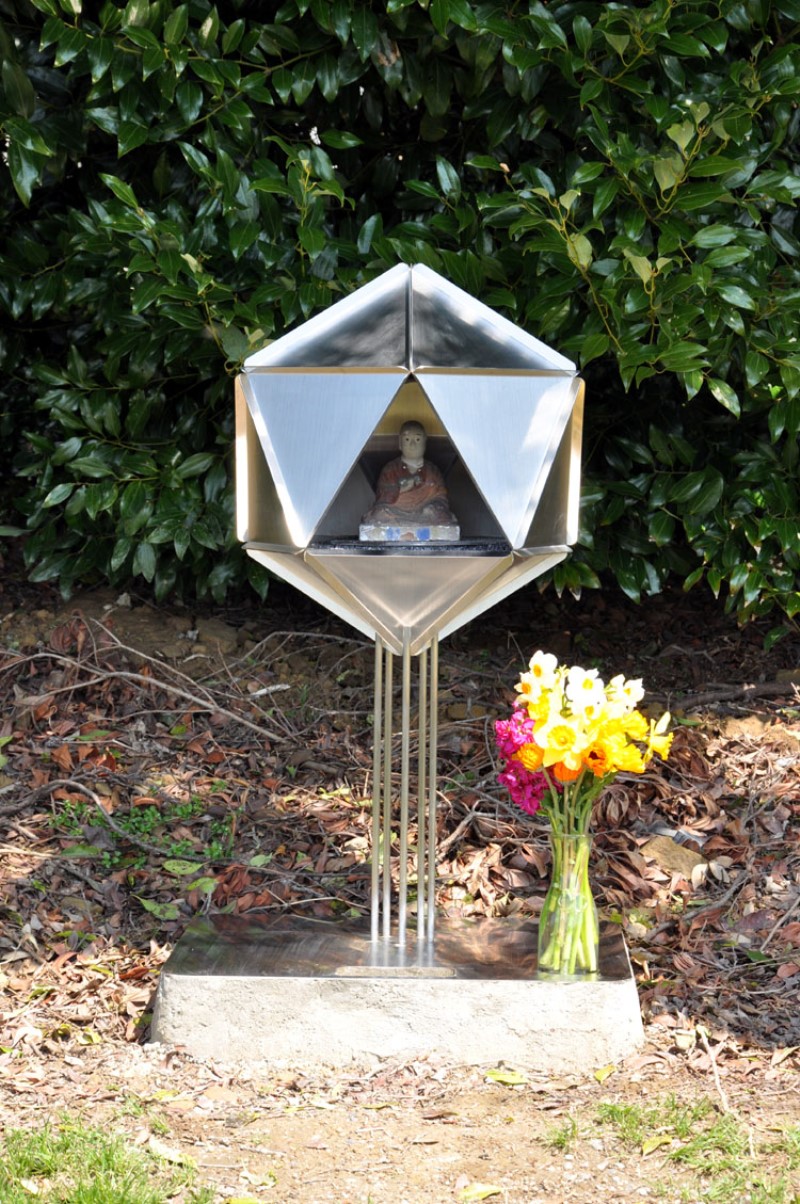 Befitting of a place filled with sunshine all day, this hokora shrine is an icosahedron made of stainless steel.
Its shape is suggestive of a diamond throwing light all over because Kobo Daishi’s posthumous Buddhist name is “Henjokongo”, which means “universal illumination”.
Furthermore, Kobo Daishi is said to have a close connection with a lode of “silver the convergence between the past and the present” (mercury).
Here, you can feel it 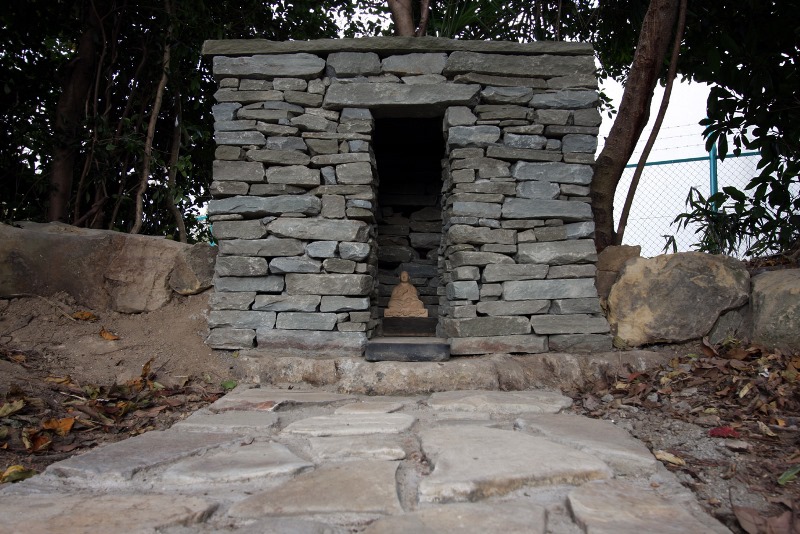 No.55 Nidaime yagisantachi to Kukai yubin to Billy the kit (The Second Generation Goats: Kukai Yubin and Billy the Kit)
by Manuel Tardits (Mikangumi) 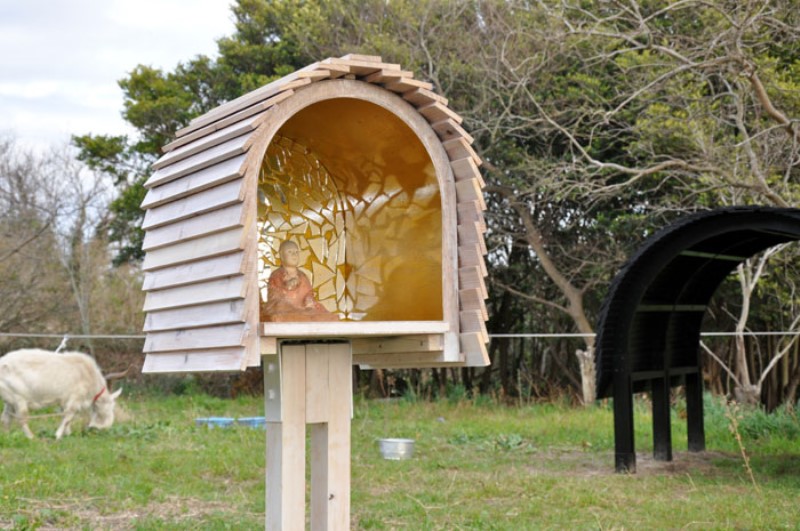 The inside of the hokora shrine is painted gold. A smashed mirror hangs at the back, seemingly showing the majesty of Kobo Daishi.
The shed for Billy, a goat kept by island locals close to the hokora shrine, was also designed at the same time, and is paired with the shrine.
It was inspired by the lyrics of “Yagi-san Yubin” (by Michio Mado), which talk about a White Goat (Billy), a Black Goat (Billy’s hut), and mail (Kobo’s shrine stands for a post box), it is a clever and witty structure. 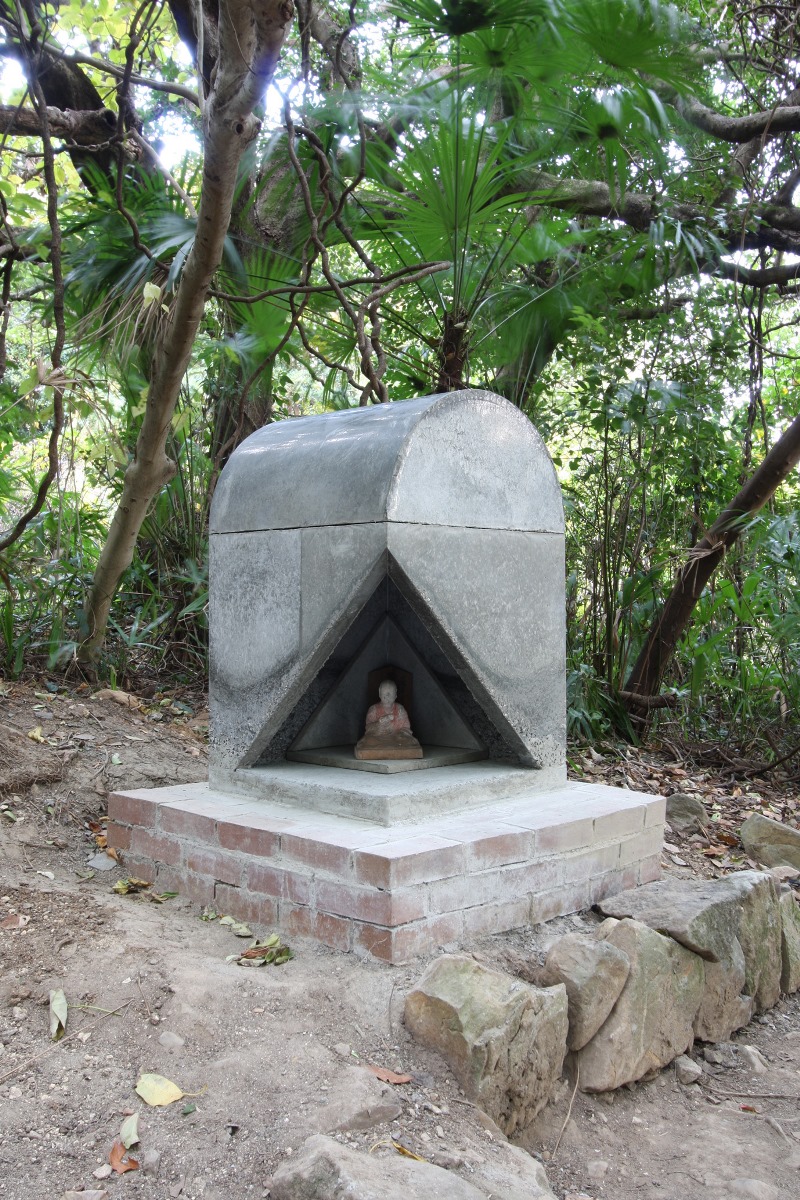 The arched design and platform of this hokora, which had completely collapsed and lost all its original materials, follows the memory of Sakushima’s Kobo.
Small chairs for worshippers were also built around the concrete hokora, which shines like granite. 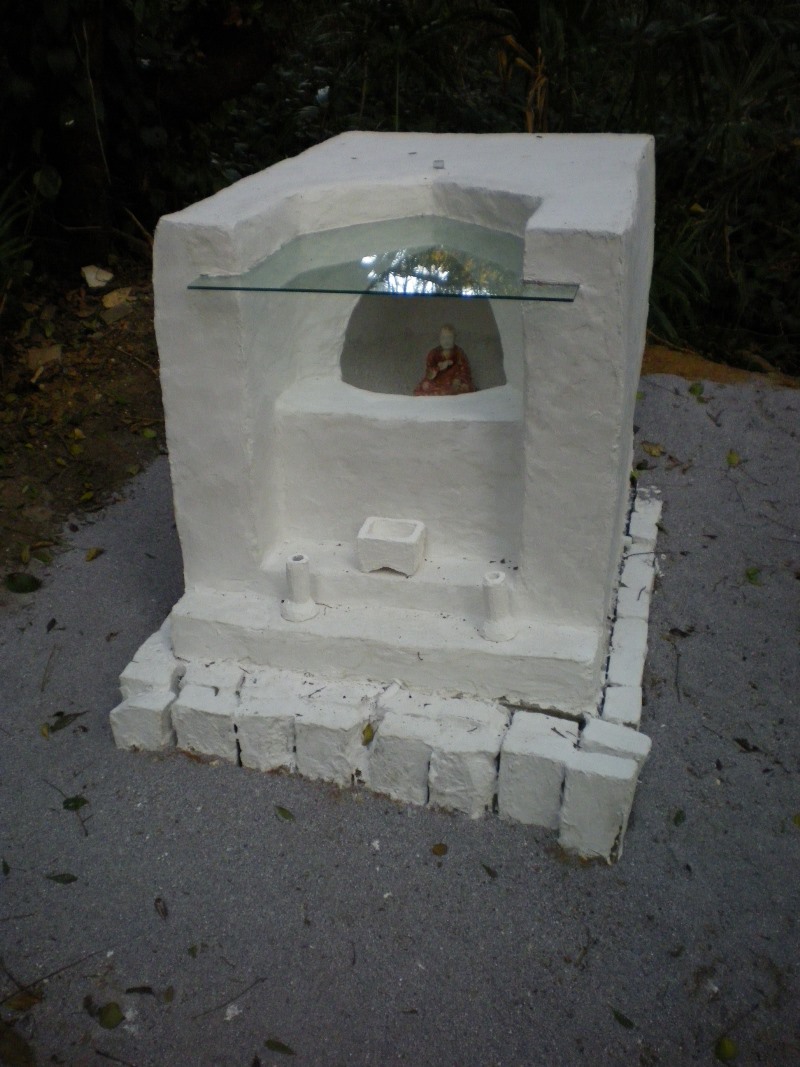 Made up of a square and a circle, the shape of this hokora is likened to a mandala.
” Kobo Daishi’s quote, “As my heart like the sky, as my heart like the ocean” is represented abstractly.
The bricks of the old hokora were used and painted with Sakushima’s signature plaster to make this hokora. 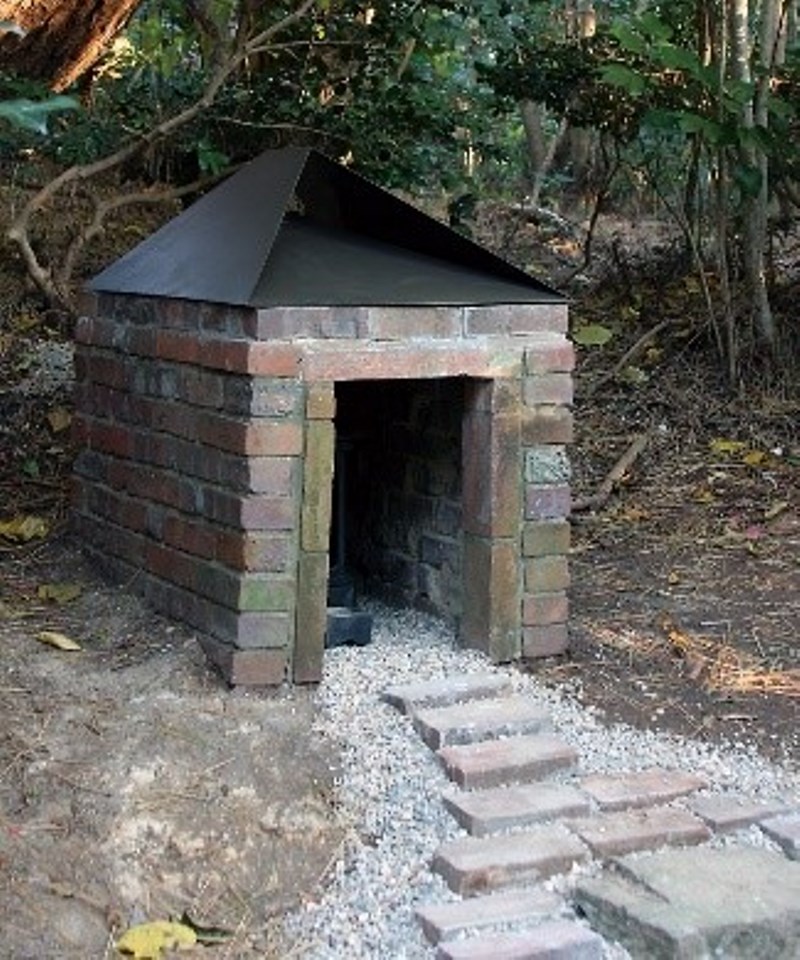 The main body of this hokora was made old bricks with some light repairs.
The collapsed roof was replaced with a hipped roof, which are often seen on Sakushima, made of iron.
The structure lets in the light and the breeze.

No.67 Kioku no hako (Box of Memories)
by Meijo University Tanida Laboratory 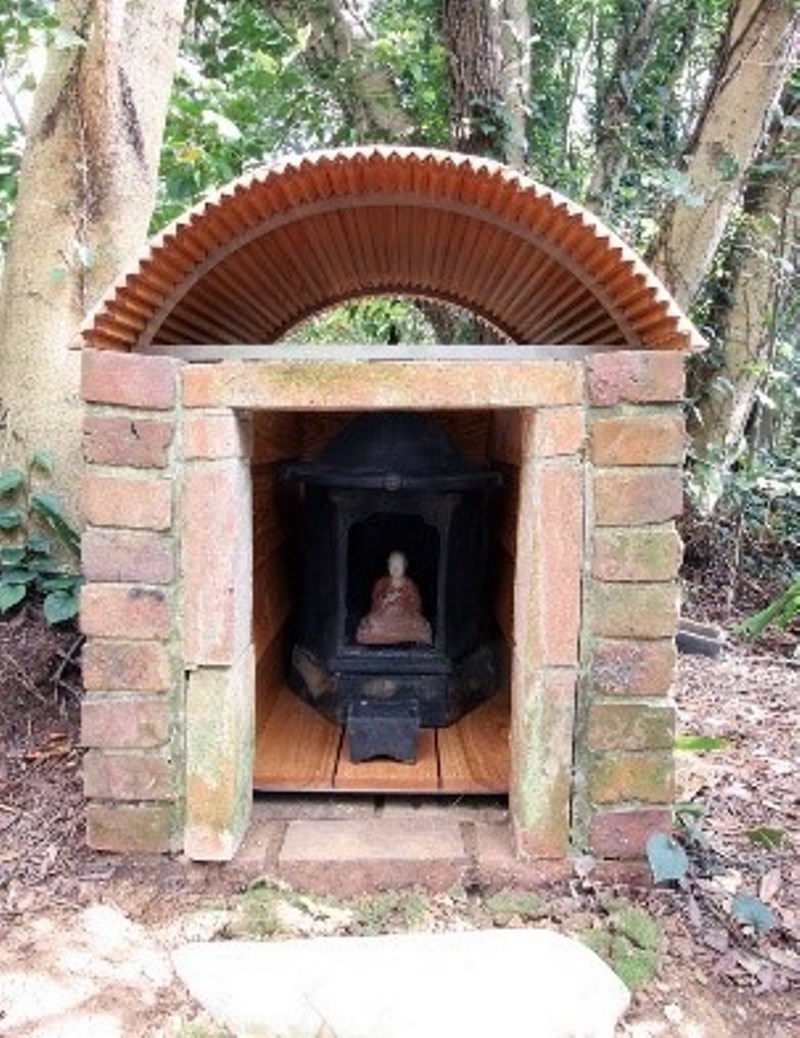 The main body of the hokora uses the old bricks as they were.
The interior, which is integrated with the arched copper plate roof, is made of wood in consideration of future maintenance.
It was designed to mimic the private residences on Sakushima.
Since it is in a recessed location, a path was also constructed.

No.80 Sora to umi o nagameru takadai de “Horizon” (“Horizon” on a Hill Overlooking the Sky and Sea)
by Kiwako Kamo (Mikangumi) 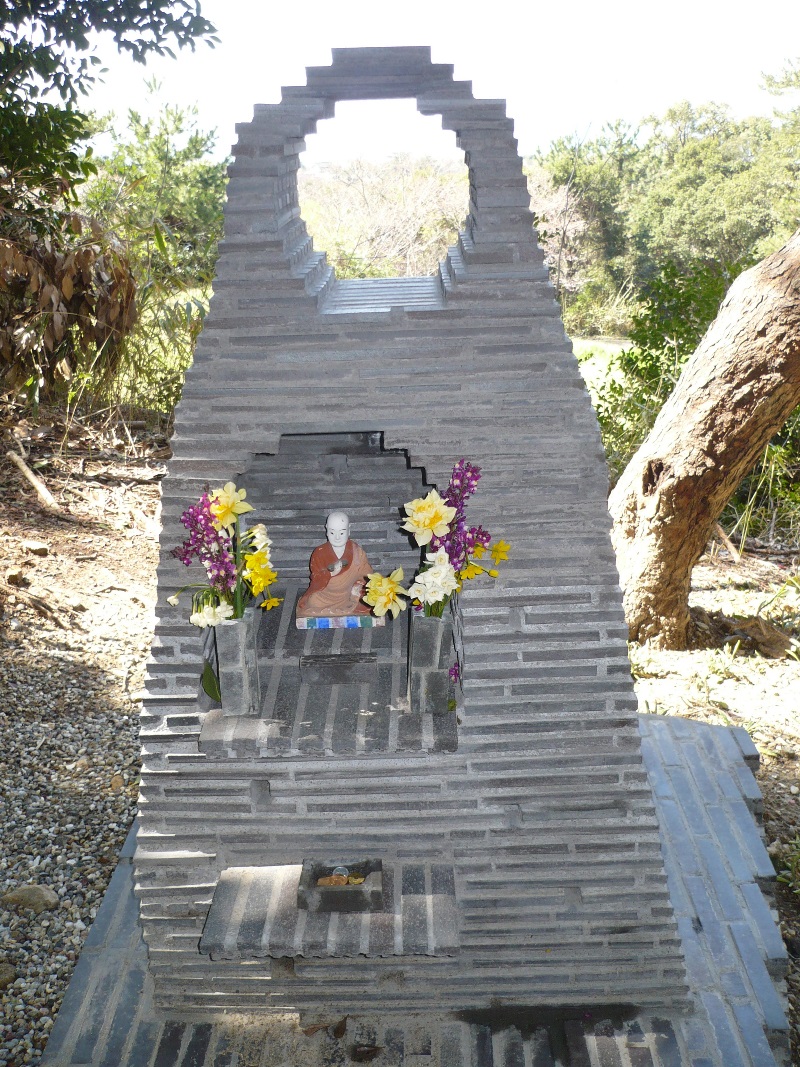 The hokora, which was made by stacking brick tiles from the Chita Peninsula, is reminiscent of the old brick hokora of Sakushima.
The horizon can be seen through the circular window at the top of the hokora.
You can see the surface of the sea twinkling when the sun sets on the edge of the Sky and Sea hokora (the characters “sora” [sky] and “umi” [sea] in the name of this hokora can also be read as “ku” and “kai”.
“Kukai” is Kobo Daishi’s original name), and if the weather is good you can see the Kii Peninsula.
Mt. Koya, a Buddhist training ground opened by Kukai, is located over there.

No.81 Kai no you na isu no yo na “kobo no koshikake” (Kobo Sitting as if in a Chair-like Shellfish)
by Ogawa Jiro and the Nippon Institute of Technology Ogawa Laboratory 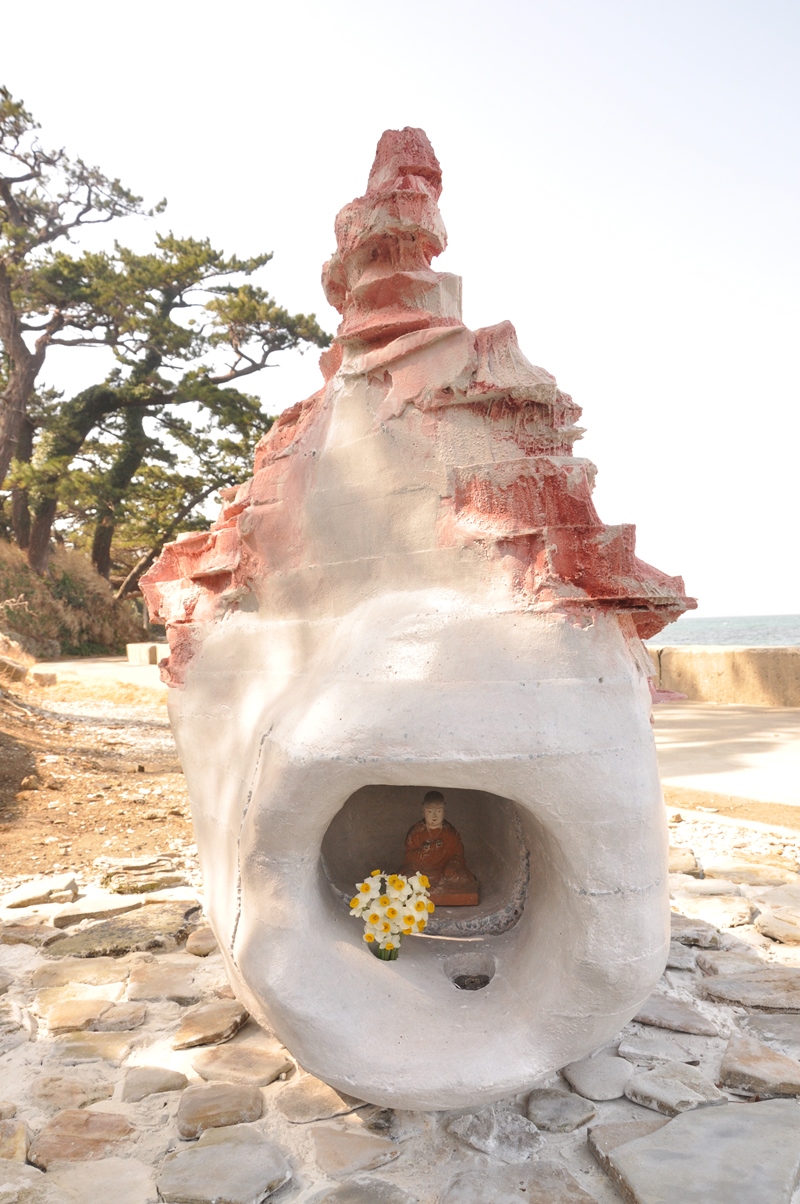 The hokora along the seaside embankment overlooking the Chita Peninsula is based on an organic appearance, with the shape and color of a huge shell.
It protects Kobo from the strong winds and waves from the sea.
Please spend your time sitting here with Kobo peacefully while looking at the sea.