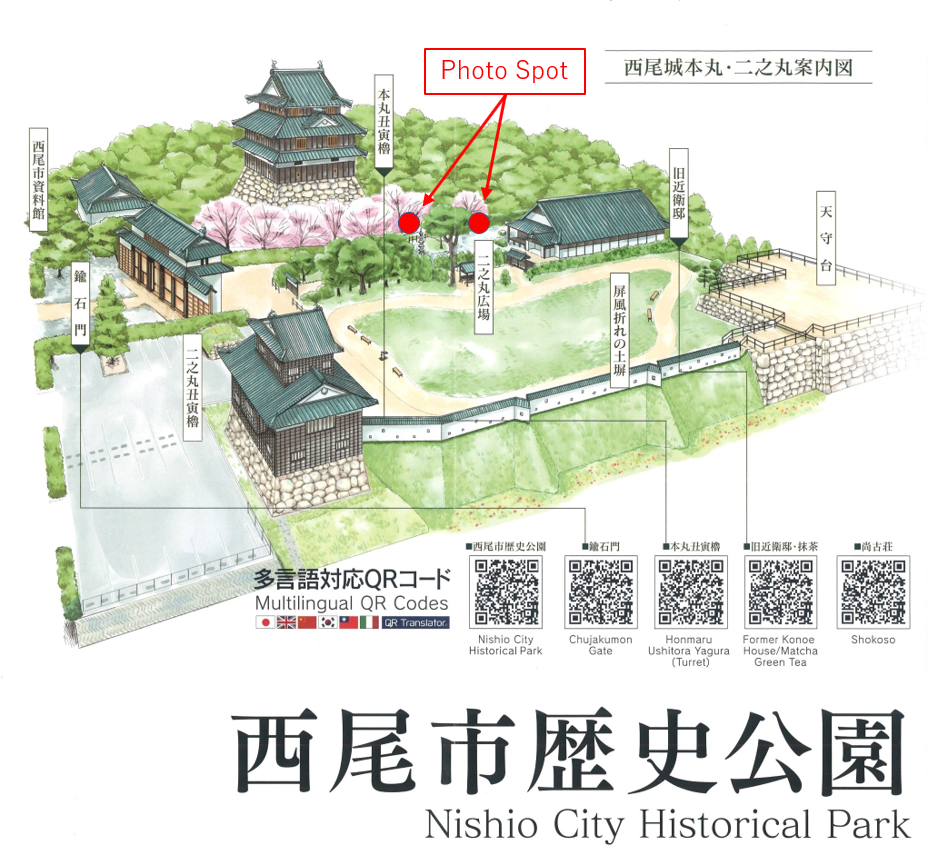 During the Kamakura period in the first half of the 13th century, Kira-so, the old name for Nishio, came to be ruled by the Ashikaga (Kira) clan.

It is said that Ashikaga Yoshiuji, who was appointed as governor (shugo) after the Jokyu War for his excellent service, placed his eldest son, Osauji, as estate steward (jito) and established his base of operations in the vicinity of Nishio Castle.
After the Onin War, among the castles built in various parts of Japan, was Nishio Castle, a large-scale castle that was built on the present site.

The castle was abandoned in 1872 (Meiji 5) and most of the buildings were destroyed.
In 1561, Tokugawa Ieyasu’s vassal Masachika Sakai, made a triumphant conquest of the castle; In 1585, Ieyasu ordered the castle to be expanded and established as a base in the southern part of the Nishi-mikawa region, it was further expanded during the Yoshimasa Tanaka era.
During the Edo period, the castle town continued to develop under the Honda, Matsudaira, Ota, Ii, Masuyama, Doi, and Miura clans’ castle lords.

The town prospered in 1764 as a castle town with 60,000 koku of rice (traditional unit of volume, approx. 180.4 liters) when Ogyu Matsudaira became Nishio’s feudal lord (daimyo.)

In March 1996, the Honmaru Ushitora Yagura (turret) and the Chujakumon Gate and so forth were rebuilt on the grounds of the Nishio Castle ruins and established as Nishio City Historical Park. The castle tower and other structures were restored in March 2014.
In 2020, the Ninomaru Ushitora Watchtower as well as the earthen wall called byobuore (shaped like a folding screen) were completed. It is a popular place among visitors where you can experience the history and culture of Nishio City.

The tower is approximately 10m high and consists of three stories.
The first and second floors of the building are 6 meters square and the third floor is 4 meters square.
The roof is made with traditional roof tiles (hongawarabuki), the top part of the outer walls on each floor are solid plastered fire-resistant (shikkui-nurigome), and the lower parts are clapboarded.

This is the main gate to the Ninomaru Palace, a two-story gate with a width of 8m and a height of 6.7m, it is the second largest gate next to the Otemon Gate and Shinmon Gate.
In the old maps, it is written as ‘Entrance Gate’ or ‘Chujakumon’ (inner gate.) It is thought to mean the ‘inside fence gate’ since it is passed through after going through the Otemon and Shinmon Gates.
Also, because of the Chinese characters for Chujakumon 鍮(brass)石(stone), it is also thought that there might have been brass decorations on the gate.

A part of the Konoe residence consisting of a study and a tearoom that were relocated from Kyoto.
The Shimazu family built the residence on Konoe Tadafusa’s property (who served as the head advisor for the Minister of the Left) because of the marriage between the two families.

The building is thought to have been built in the late Edo period.
The study has two rooms, a 10-tatami mat ichinoma and an 8-tatami mat ninoma.
The pillars are thinner compared to those of regular buildings, and nageshi (beams running between columns in traditional Japanese architecture) are not utilized, it is a simple and calm sukiya-style structure.
The tea room consists of a 6-tatami mat tea ceremony room, a tsuginoma (next room) and a tatami mat corridor.
It has a unique structure called “teishu-doko,” in which a tokonoma (an alcove) is positioned beside the temaeza (host’s mat). A thick “tokogamachi” (a decorative crosspiece used at the front end of an alcove to cover the edge of tatami mats) is used, making it suitable for a nobleman’s tea ceremony. 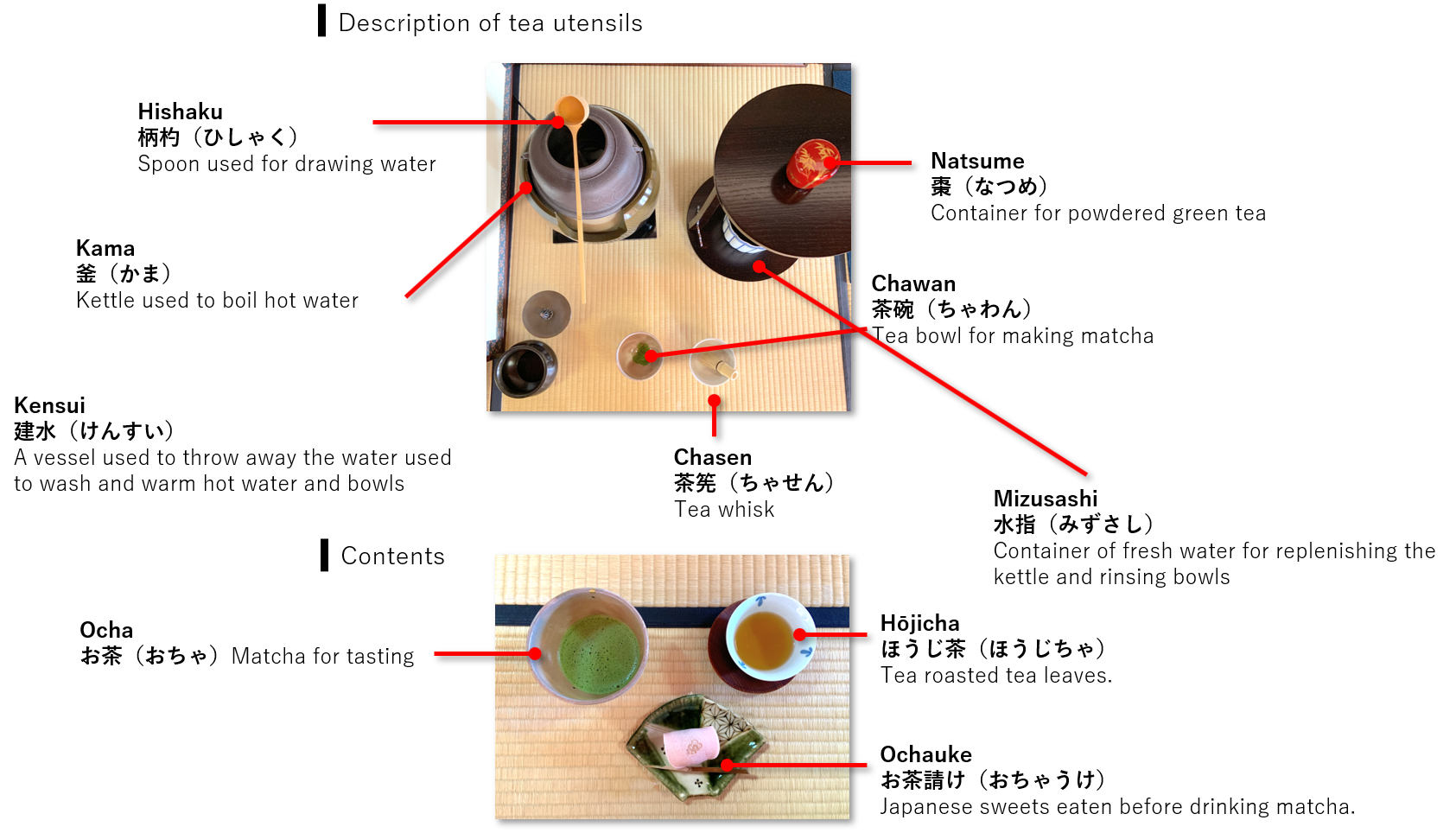 A Japanese garden and building built in the early Showa period by a rice merchant, Daikokuya Iwasaki Akisaburo.
The garden was designed using part of the historical sites, such as the Higashi-no-maru Ushitora Watchtower ruins. It was named Shokoso because of his fondness for Nishio Castle.
There is also a tea room and a gazebo (azumaya) that were built as a secondary residence for Tsuji Rihachi, the 8th generation proprietor of the hardware store “Nabeya.”

The museum was completed in August 1977 at the site of the Nishio Castle ruins with a generous donation from the late Kinosuke Sugiura according to his final wishes.
The museum provides exhibits where you can learn about Nishio Castle and the history of Nishio City.

Ninomaru Ushitora Yagura is a three-story building with a double-tiered tower.
The earthen wall leading to the castle tower has two “folding screen” like features called byobuore, which is a rare feature in Japan.
Earthen wall was designed to have a highly defensive structure so enemies hiding up against the earthen wall could be shot with guns.