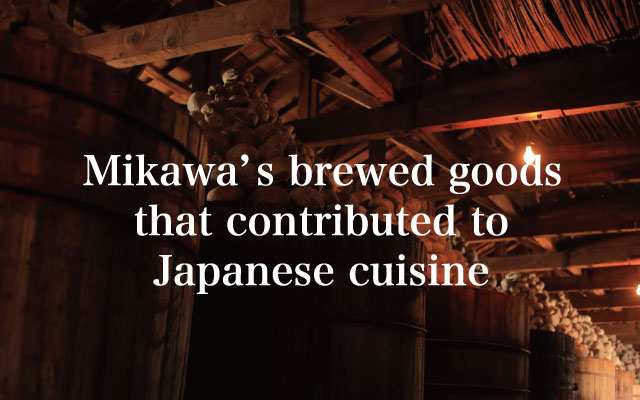 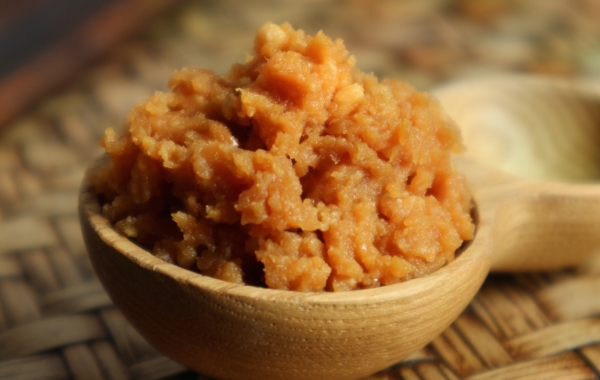 For more than a thousand years, miso made from whole soybeans has been a staple of Japanese home cooking. The kind made in Nishio does not contain rice, wheat, or barley and is called akamiso, for the reddish-brown color of the pure soybean-paste after its long fermentation period. It is a specialty of the Mikawa region, and greatly prized for its deep flavor and use as a preservative.

Miso used to be made in the family, the true “taste of home”. But with the economic expansion of the Edo period, some kinds of miso became more popular than others and their use spread nationwide. Nishio’s red miso is renowned for keeping its aroma even when it is boiled and for rounding out the taste of other ingredients in cooking.

Misokattsu pork cutlets and Doteni udon noodles simmered in miso have long been favorites of the regional cuisine of Aichi. In recent years, people are becoming more aware of the nutritional value of soy products like miso and it is even attracting attention as a health food around the world now.

Because miso is a fermented food, traditional miso makers are often called jōzō – breweries – in Japanese. There are three of them in Nishio.

Hatoya began making miso in the Edo period, some 300 years ago and continues to use traditional methods and ingredients. “The key to understanding miso is that it’s not made by humans, but by fermentation”, says Kinji Toriyama, the ninth generation owner of Hatoya. “Our role is to create an environment where the fermentation process can do its work. We don’t need modern technology for this – making delicious miso is a matter between humans and nature alone.”

To show how this is done, Mr. Toriyama launched Miso Park ten years ago. Here, you can see, taste and even try hands-on what making miso is all about. The park features a variety of facilities, including a museum, a miso-making experience hall, a restaurant that serves many miso dishes, and a specialty shop for miso and soy sauce, alongside other specialties from Nishio.
About Miso Park 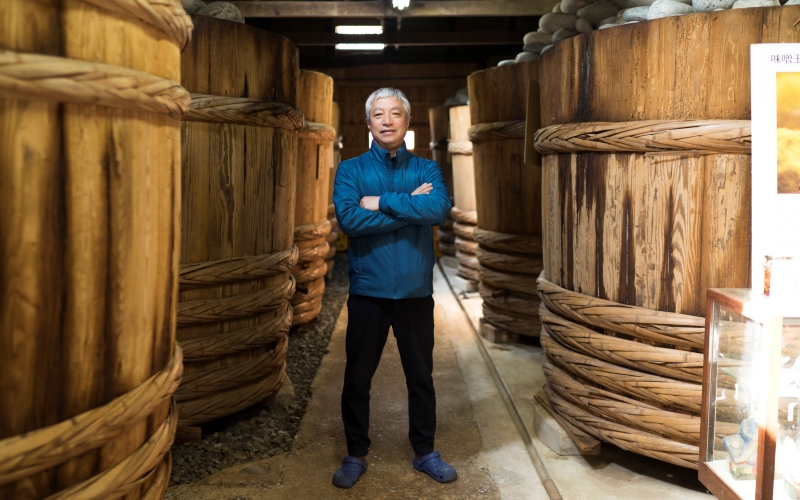 The miso of Shigeru Suzuki, third generation proprietor of Suzumiso, is hand-made and additive-free. “We continue the traditional food culture of the fishing villages on Mikawa Bay and preserve their unique way of making miso”.

His Bara Kōji (Rose Miso) is a pale, light miso with a short ripening period. It brings out the delicious flavor of the soy-beans and complements seafood well. Although it can be used as an everyday miso, Suzumiso prides itself as the best match for the popular local asari clams. 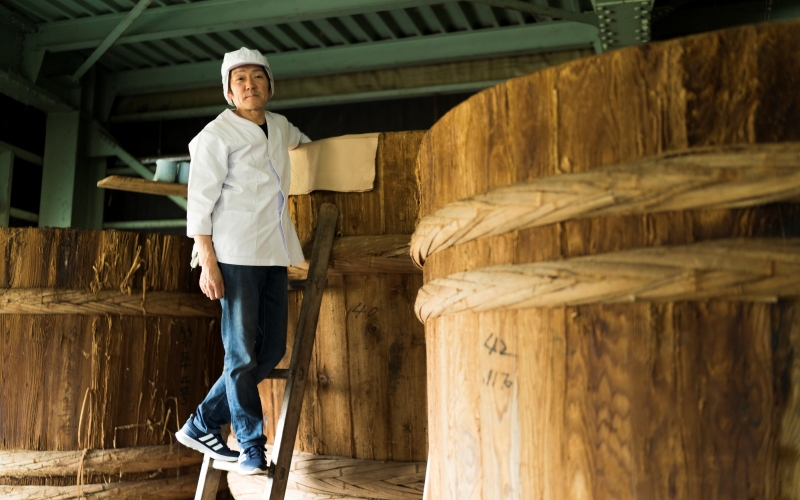 The characteristic taste of Imai’s whole-bean miso is owed to its minimalist production method. It is made without extracting the tamari, a savory liquid similar to soy sauce that collects in the brewing vats as the miso ages. The paste is also left unpasteurized, resulting in an authentic, raw miso with living bacteria cultures that keeps ripening.

To promote the unique miso his grandfather created, Mr. Imai began sending out his Zoumeshi-ya (“Elephant Fodder”) food truck. A few years later, he opened Zoumeshi-ya as a permanent shop and restaurant and, more recently, his Kissa Zoumeshi cafe. Here you can enjoy a varied menu with miso dishes as well as other delicacies. 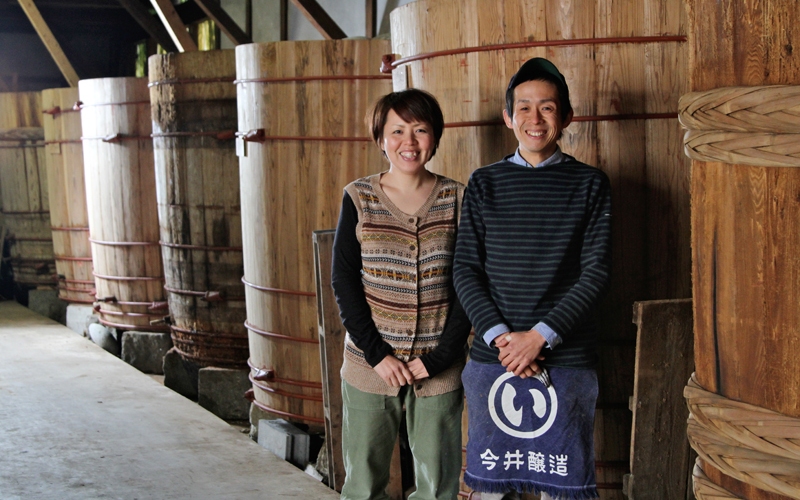 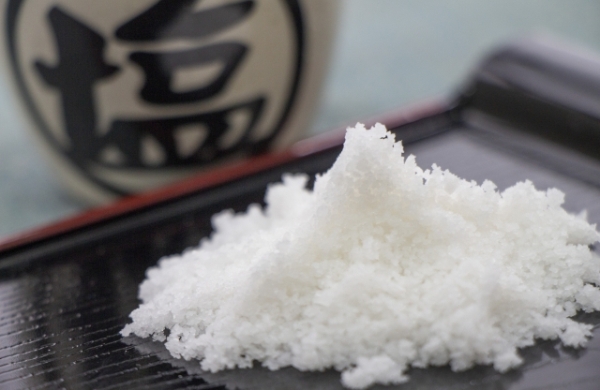 Finds of ancient pottery and other remains attest to the long history of human settlement in Mikawa Bay. And it all began with salt making, which dates back to the Kofun period, in the fifth century AD. Because Japan has no rock salt deposits or salt lakes, all its salt had to be made from sea water.

The shioda salt evaporation ponds on the sandy shore in Kira, in the south of Nishio City are mentioned in historical records from the Japanese Middle Ages, the Muromachi period. In the following Edo period, Kira Kozukenosuke Yoshinaka pioneered a new salt production method, making salt ponds lined with channels, called “irihama”. They were used to evaporate sea water down to a higher salt concentration which was then boiled to crystallize the salt.

In those days, aiba-jio salt from Kira was prized because of its low content of the bitter nigari (magnesium chloride) and was traded along the Sanshukaido salt road all the way to Toyoda and Nagano. It was also a key ingredient in Okazaki’s famous Hatcho Miso.

Gradually, more modern salt production methods prevailed and the salt ponds were abolished nationwide in 1971. The last remaining salt maker in Nishio was Aiba Shionosato in Kira. Today, some of their salt ponds have been restored and you can try boiling brine and making your own salt at a museum there.

There are two kinds of events available on request. You can take back the salt that you made after either course. 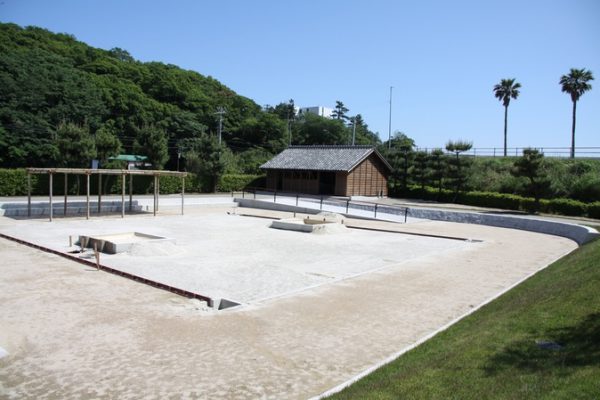 Experience all the steps of the salt making process hands on.
Sprinkle sea-water on the sandy salt ponds in the morning. After drying, the concentrated seawater brine is extracted.

The brine is the boiled down to salt in the afternoon. For school related events, members of Kira Irihama Shioda Preservation Society are available to support the experience. 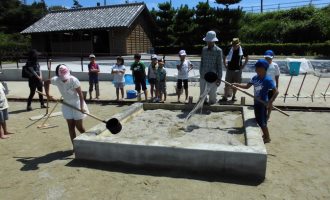 This is an introductory course where you can easily try your hand at salt making.
Deep seawater taken from the salt fields is boiled down to make salt. About 20g of salt can be made from about 20ml of brine, or from about 100ml of concentrated seawater.

Fresh salt is a semi-liquid sludge, but if it is spread out on kitchen paper and dried for a week or so, it will become pure white and smooth. Kira salt is popular for its delicious sweet notes. It goes well with onigiri rice balls, boiled eggs, and tempura. 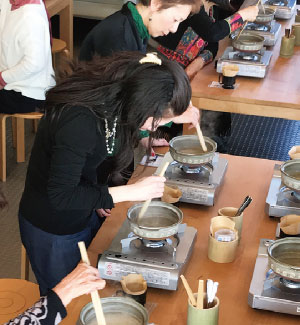